Watch as homeowner Bill Gray takes us around his recently remediated stucco home near West Chester to show us what Stucco Today had done for him, and tell us how his experience was with our service. Bill is a very interesting guy. A bridge salesman by day, Bill has a strong presence and voice. The result was the quickest and more professional sounding testimonial we’ve yet recorded, all in one single take.

Bill came to us with a house he wanted to sell, and a report that found issues with eight of his windows. The problem with building envelope reports like the one he had is that they can only give so much information about the condition of the substrate. Only after remediation begins will the full extent of any damage be visible. Because of this, one of our most important tasks in our sales process is to explain this and prepare the homeowner for the possibility of additional damage that needs remediation. This particular project ended up going that way, with extensive damage underneath large portions of the stucco siding away from the windows themselves.

This damage is very visible in the video we recorded of the project. Most of the video shows the remediation of the east side of the house. On that side, only two windows were flagged for repair, but upon beginning to remove the old stucco, extensive damage to the substrate was found to almost the entire wall. As a result, we consulted with Bill and made the decision to remediate all four windows on that face, as well as the entire surface of the wall. Other surfaces, in particular the north side of the house, were much more in line with the estimation of damage in the initial report, but in all, 5 windows were added to the work order beyond the original 8. 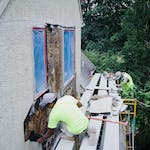 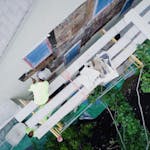 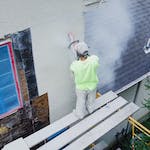 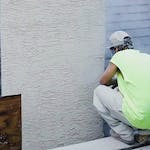 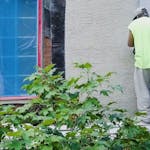 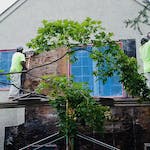 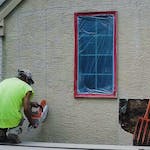 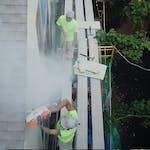 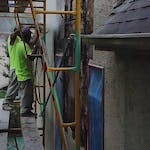 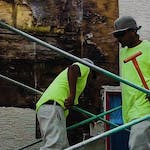 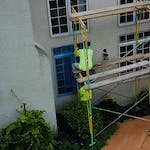 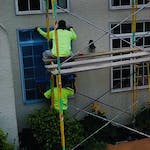 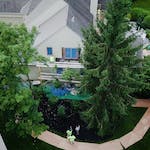 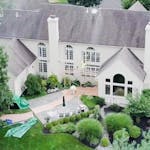 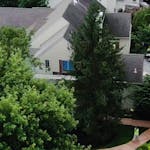 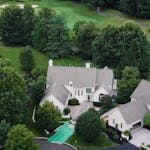 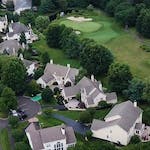 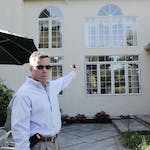 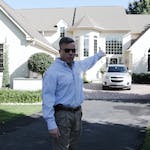 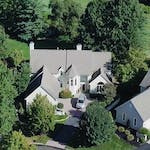 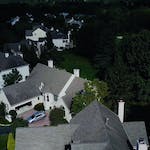 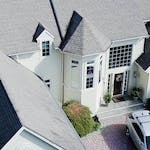 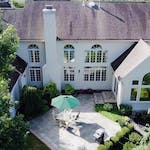 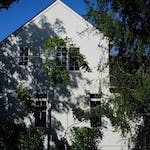 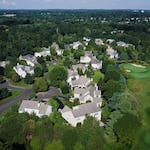 “My wife and I decided to sell our house in the spring of 2017. We put the house on the market in May, and subsequently about 4 weeks after putting it on the market, we noticed that this particular window had a leak as a result of a thunderstorm. So we retained a home building envelope inspector who came out and inspected all 33 of our windows, and found that 8 of them were showing signs of leakage, including the one I just mentioned.

“We received 3 quotes on this project. Chris was actually the most responsive. He came out here within 48 hours of my request, and had his proposal to us within 24 hours for the work. When I interviewed Chris subsequent to the receipt of his proposal, his knowledge base on the issues at hand was very thorough. He understood the report, and he explained to me that, while his budget for this reflects what’s on the report, I can expect that there is probably going to be some additional work. He prepared me for what was inevitably a change order to add additional windows. We actually added five additional windows to the scope of the work because of the extent of the damage that was not picked up in the inspection report. Again, inspection reports are a tool to get you to an understanding of the extent of your damage, but depending on your situation, it may be more extensive than whats in the report itself. He was very thorough in going through all that, and he was also extremely professional in that all of his documentation, insurance certificates, permits, etc. were all taken care of prior to the mobilization of the work.

“We’re currently looking at the east wall here, as you can see there are four windows on this wall, two of them were designated for repair. When the crews began the work, it was pretty obvious that the wall was in far worse condition than originally anticipated, and as a result, we decided to take out the entire wall, not just the areas around the windows in question. So all four windows were removed, the wall was remediated, and the windows were put back in with current specifications for sealing the windows.

“So now we’re looking at the north side of the property. There were two areas in question. This particular window system here on my right, and on my left there is another window system which we will be visiting shortly. This particular window system fortunately did not require a full wall remediation. Just the areas in question were the lower portion of the wall below the window. As we have found out through this process, what really occurred here was a lack of attention to the building codes that were required for the installation of these windows. There was no flashing done at all on any of these windows, and the windows with the most exposure, as you can see there is no soffit on this particular wall, so the window is under maximum exposure. The lower portion of this particular wall was remediated. The nice thing was that there was a shield across the arch at the top of the window, which prevented damage to the top of the window.

“Now we’re still on the north side of the property, looking at the center wall system, where there were two windows that were defective. Fortunately, as a result of the remedial work that was begun on this to remove the stucco and examine the substrate, we found that there was limited damage, so we were able and fortunate enough to only have to remove the lower portion of the wall and not the entire wall system. Both windows were removed and replaced with the proper flashing, and in this particular case, as you can see, there is a soffit system over top, so that is a very good protection system against any damages to the windows, because it prevents water from getting to those upper windows. So we did not have to remediate them.

“One thing I should point out, too, is that the crews that were out here every day did a meticulous job of maintaining the integrity of the propery surrounding the house, by using a plywood system of a walking boardwalk to allow them to get to their proper areas, and at the conclusion of each day, all the things were packed up and put away, so the house was restored to order on a daily basis.

“So now we’re on the south side of the property, the front of the property, and there were two areas in question on this particular side of the house. On my left, there is an arched window system looking out from the office, and on my right, there is a small single window by the garage. The garage window itself was not particularly in bad shape, except for the fact that over a period of time, an unknown leak was occurring due to the gutter system, not necessarily the construction of the window. The seals had broken on the cap, and there was no visible sign that water was leaking out of the gutter system, but when the wall was taken apart, the entire area on the left side of this window system, nearest the garage and the gutter, was in really bad shape. So that entire wall system around that window had to be remediated and restore. The window on the left, again we were fortunate because of the soffit system and the cap across the top of the arch, we only had a small amount of remediation to do on the lower portion of that window.

“I had a positive experience with Stucco Today and the crews. One of the most important things from my own personal business experience was that the crew that came out here was the same crew every day, they worked very well together, they knew each other’s strengths, and they were able to compliment each other in the execution of the work. The work site itself was kept immaculately clean. We had a dumpster in the driveway, and we had a work truck in the driveway as well. And all their material was taken out during the day, and put back into its proper places in the evening. So when my neighbors came home, unfortunately they had to see the dumpster, but there was no way around that due to the nature of the work, but in general the entire property was kept neat and free of any debris at the end of each work day.

“One of the real benefits of using Stucco Today was that they were a single source of responsibility for the entire project, including a minor roofing repair, gutter repair, as well as landscaping services at the conclusion of the work. The nice thing, too, about them, was that every day, the work area was cleaned up, and all the materials were put away, to reflect a property that had some equipment in the driveway, but the rest of the property looked untouched.”